Key features of the Education System

Nevertheless, at local level, and since the start of a process of decentralisation of competences in the administration of the educational system in the 1980s, local authorities have been playing an increasingly significant part in governance, ensuring the material operation of the system (construction and maintenance of school buildings, school transport, supply of educational materials, etc.).

France has a long tradition of pre-primary education: for the past twenty years, almost all children have attended école maternelle (nursery school) from three to six, even though it is optional; it is therefore an integral part of the French education system and falls under the responsibility of the Department for National Education, Higher Education and Research, which sets the curricula.

French pupils are taught the same subjects until the age of 15 within a "collège unique" (ISCED 2). The first stage of specialisation occurs at the end of collège (lower secondary education): pupils are streamed to attend either a general, technological or vocational lycées. All prepare pupils to take the baccalauréat in three years, marking the end of secondary education: pupils who pass it obtain the State-issued baccalauréat diploma (general, technological or vocational) which opens up access to higher education and entitles them to enrol at university.

Higher education is characterised by the coexistence of two systems: universities, – public institutions that have an open admissions policy, except for Instituts Universitaires de Technologie (IUT - University institutes of technology) or some classes préparatoires intégrées (integrated preparatory classes) – and a non-university sector, including, in particular, Grandes Écoles (Elite Schools), with a highly selective admissions policy open to baccalauréat holders having attended two years of classes préparatoires, themselves highly selective on entry and during the course. Post-secondary non-tertiary education is marginal in France: the only two diplomas of ISCED 4 that the French education system provides combined amounted to less than 10,000 graduates in 2014.

In 2014, the French education system provided schooling for around 15.4 million pupils, students and apprentices (representing about 23% of the national population). All financing parties combined, the national community effort towards education activities was estimated to 146 billion euros the same year (the equivalent of 6.8% of the Gross Domestic Product) (MENESR-DEPP, RERS 2016, p.12/13 and p.324/325).

Stages of the Education System

Education is compulsory between the ages of 6 (which corresponds to the start of primary education) and 16 (which does not represent the end of a cycle – see figure below).

Structure of the National Education System 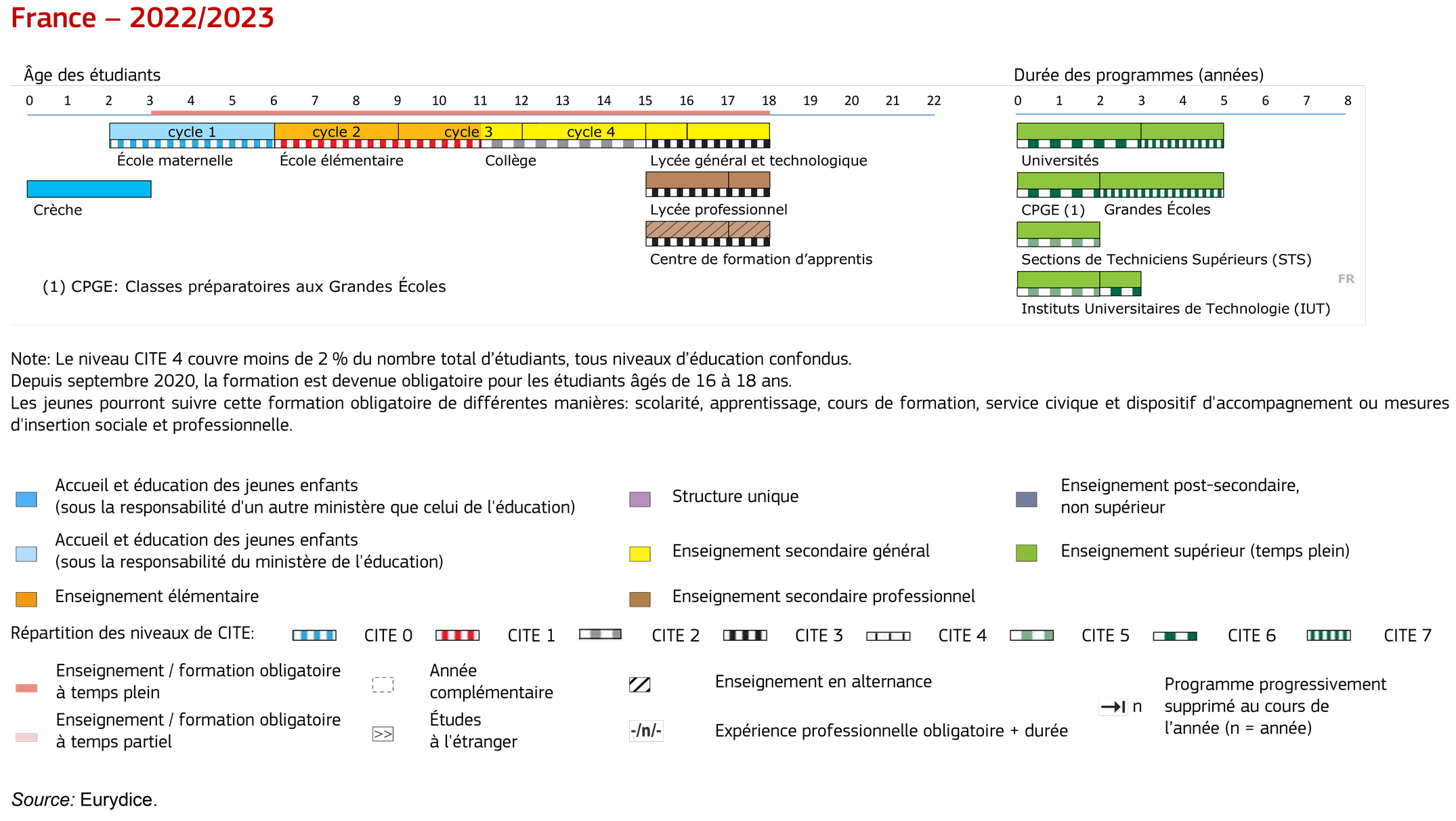