Pupils from part-time vocational school, schools of intermediate vocational education and training (=schools of intermediate VET) and colleges of higher vocational education and training (=colleges of higher VET) are assessed by continually observing their involvement in class and by carrying out written, graphical, practical or oral performance appraisals. The exams, tests, etc. are prepared and assessed by the class teacher. Relevant regulations are laid down in the ordinance on performance assessments. In the VET sector, graphical, practical and combined forms of performance appraisals are more frequent than in the general education sector.

For apprentices, specific regulations apply to in-company training: They are assessed by the person authorised to train apprentices. Large companies with their own training workshops often have similar exam and assessment systems to schools. Pupils at a part-time vocational school receive an end-of-semester report and final certificate every school year.

In the final year of a college of higher VET, a diploma project is prepared during and outside instruction time, with teams working on subject-related connections in a form that is appropriate for the profession. In many cases these projects are carried out jointly with, or commissioned by, business and industry. It is one part of the oral matriculation and diploma examination.

The provisions of the School Education Act apply (§ 25 ff.  on progression).

Pupils are also entitled to take a repeat exam at the beginning of the following school year in one or two compulsory subjects.

After taking the apprenticeship-leave exam, graduates are classified as skilled workers or journeymen/-women.

The final certificate of part-time vocational school is issued by the respective school, the certificate on the apprenticeship-leave exam by the regional economic chamber.

A prerequisite for the successful completion of a school of intermediate VET and a college of higher VET is the positive assessment of all compulsory subjects foreseen by the curricula in all school grades and all specialist areas of the final examination.

Exceptions: At one- and two-year schools of intermediate VET and three-year schools of social occupations, no provisions for a final exam have been made. These schools are completed with completion of the final year.

The finalexamination at schools of intermediate VET is recognised by the state. It is taken before an exam committee headed by a school supervision officer. According to the Vocational Training Act it provides access to professional activities which usually require the apprenticeship-leave exam in a related apprenticeship. The Industrial Code (Gewerbeordnung) regulates the prerequisites for exercising trades.

Colleges of higher VET are completed with a final certificate and the matriculation and diploma examination. The examination is recognised by the state.

The new matriculation and diploma exam was introduced in 2015/16 at colleges of higher VET. Pupils can choose to take either 3 written and 3 oral or 4 written and 2 oral exams. Similarly to the new matriculation exam at AHS, the tasks of the written general-education subjects are standardised. The standardised defined examination assignments are done by the candidates in the whole of Austria at the same time. The texts in German, a modern foreign language and mathematics are occupation- and application-oriented. The oral exam in which the practice-oriented diploma project is presented has not been standardised. In every college it must be taken before an exam committee headed by a school supervision officer, however. The final exam leads to the higher education entrance qualification and professional qualifications.

This means that graduation at a college of higher VET leads to a double qualification. With the matriculation, graduates can consequently take up a higher education programme. With the qualification for professions, graduates acquire authorisations according to the Industrial Code. This means that after several years of professional practice they are entitled to pursue relevant trades as independent entrepreneurs.

Education and training programmes at Austrian colleges of higher VET can be assigned to the diploma level of the Directive (according to Article 13(2) subparagraph 3 and Annex III). As expressly laid down in the Directive, this diploma provides access to a regulated profession in another member state for which training at the level of higher or university education of (up to) four years’ duration would be necessary.

Graduates of colleges of agriculture and forestry obtain agricultural authorisations within the meaning of the Vocational Training Act concerning Agricultural Occupations.

Graduates of (most of the) colleges of engineering and crafts and colleges of agriculture and forestry additionally acquire the right to bear the legally protected professional title "Ingenieur/Ingenieurin" following at least three years of relevant and qualified professional practice and an examination. 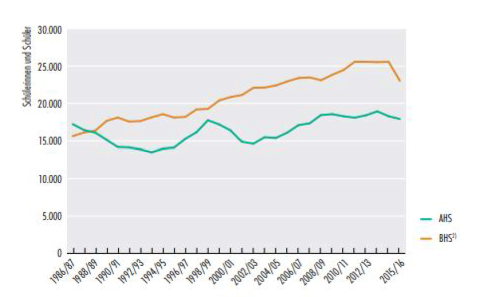 Source: Education in Figures in Austria: Key Indicators and Analyses.